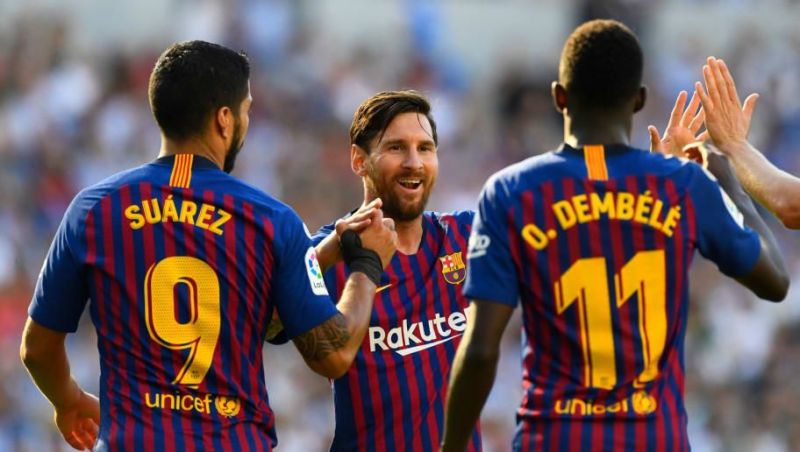 After about a four-month break, the UEFA Champions League, Europe’s top competition is set to resume today, leaving football fans in great anticipation as they look forward to watching their favourite clubs take part in the tournament once more. LaLiga giants, Real Madrid claimed the coveted trophy last term, defeating Premier League outfit Liverpool 3-1 in the final to complete their third consecutive European triumph and they will begin their defense mission by facing Roma in their opening fixture this week.

But before then, one of the most anticipated fixtures will pit Barcelona against Dutch outfit PSV today. The Catalans, after suffering a humiliating exit in the European tournament last season have come back with great determination and they will kick off their Champions League campaign by facing a young and in-form PSV side which makes the match a very promising one.

Ousmane Dembele joined Barcelona from Borussia Dortmund during the summer of 2017 – signed as a replacement for Brazilian winger Neymar Junior who departed the Nou Camp to complete a world-record deal to join Paris Saint Germain earlier.

After enduring a turbulent campaign with the Catalans during his debut season amidst injury concerns, the attacker has finally bounced back from his injury crisis and he has entered the new campaign in an electrifying form – bagging 4 fantastic goals for La Blaugrana in their last 5 matches this season.

Dembele is a pacey winger with incredible talent and unbelievable skills, capable of creating magical moments and deciding the fate of important matches just as he has shown us so far this term. Barcelona fans will be counting on him to continue with his impressive performances when they face PSV today.

Such is the incredible talent of PSV attacker Hirving Lozano that he continues to earn a lot of interest from European elite teams, with Catalan giants, Barcelona emerging as the frontrunners to lure him away from the Eredivisie.

Lozano will get the opportunity to impress against his chief suitors today when his club locks horns with La Blaugrana for their UEFA Champions League opener this evening. With his blistering pace, electrifying dribbling skills and fantastic finishing, the Mexican will definitely give the Barcelona defenders a tough time at the Nou Camp.

Following his heroics against ADO Den Haag in the Eredivisie last weekend where he bagged an incredible brace, Lozano will enter into the Barcelona game with massive attention as he continues to mesmerize football fans with his spectacular talent.

Brazilian playmaker Philippe Coutinho became Barcelona’s most expensive signing when he left Liverpool for the Nou Camp during the winter transfer window. Although he did impress domestically with 10 goals and 6 assists in 22 appearances for La Blaugrana following his move last season, he wasn’t allowed to represent the Catalans in the Champions League, having featured for the Premier League outfit earlier in the tournament.

In his first UEFA Champions League game for the Spanish champions, there is no doubt all eyes will be on the Brazilian to impress when they take on Dutch outfit PSV at the Nou Camp this evening.

With his ability to dictate play from the middle of the pitch, link up with his teammates perfectly, dribble with great flair as well as moving the ball forward to create chances for the attackers and also finding the back of the net himself, Coutinho will produce an entertaining display at the Nou Camp this evening.

Once again, Catalan giants, FC Barcelona will rely on the brilliance of their talismanic forward Lionel Messi to help them achieve a brilliant start to the new UEFA Champions League campaign.

The Argentine has been in a great form ever since the new season began, bagging 4 goals and 2 assists in 4 La Liga appearances for the Spanish champions and he will be aiming to help Barcelona to a successful campaign in the European tournament, following their bitter exit from the competition last season.

On his day, Messi is capable of destroying any team all by himself and PSV is no exception – with his ability to destroy opposition defences using his intelligent movement, electrifying dribbling skills, immense creativity and the ability to send the ball into the back of the net with great ease