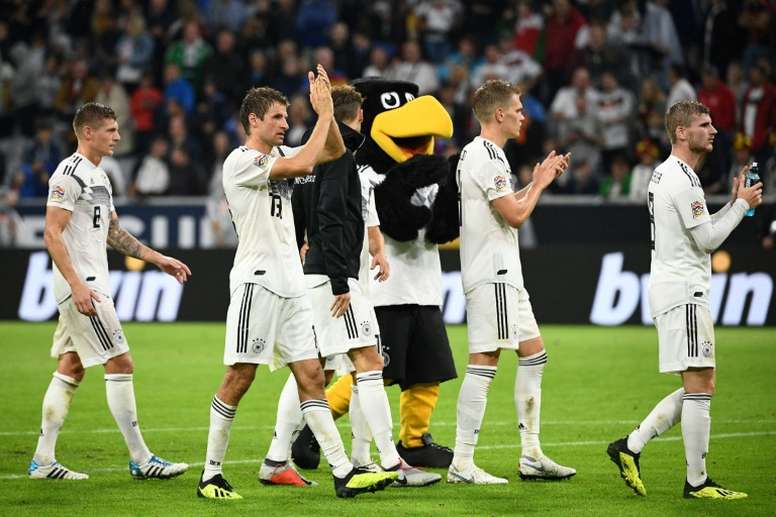 Germany are trying to move into a new era after their disastrous World Cup campaign, but Thursday’s 0-0 draw with France showed the importance to coach Joachim Loew of keeping faith in the old guard.

That quintet, with over 400 caps between them, made up the spine of the team that would have beaten France were it not for some exceptional saves from visiting goalkeeper Alphonse Areola, notably from Marco Reus, Mueller and then Matthias Ginter in the second half.

All of Germany’s starting line-up for their first match in the inaugural UEFA Nations League had been part of their squad in Russia, when they were knocked out in the group stage.

The only changed face was Leroy Sane, the Manchester City winger coming off the bench late on having been controversially left out of the 23 for the World Cup. The likes of Thilo Kehrer and Kai Havertz stayed on the bench.

“Of course we need to integrate new players. We always need to be pushing to do that, but it is a process that will not happen overnight,” Loew said after the match.

“We saw that against a team as strong as France, players like Hummels, Boateng and Kroos are extremely important, because of their class, their experience and their quality. The youngsters will get their opportunity.”

Loew also opted to start with Ginter and Antonio Ruediger, centre-backs by trade, in the full-back positions, a decision that was rewarded as Germany kept Kylian Mbappe, Antoine Griezmann and company at bay. “It was a bit frustrating that we didn’t score a goal. But we wanted to keep it tight after what happened at the World Cup. That was the priority. I think we succeeded,” said Kroos.

Germany, who host Peru in a friendly in Sinsheim on Sunday, are hoping to definitively move on from the fall-out of their World Cup debacle.

That has been marked by Mesut Ozil’s decision to retire from international football amid allegations of racism aimed at the German FA (DFB) president, Reinhard Grindel.

Loew signed a new contract through to 2022 before the World Cup began, and the Nations League offers his team an early opportunity to win over supporters once again. Germany play the Netherlands and France away in October, with the winner of their group going through to the four-team Nations League finals next June.

“We didn’t play as freely as when we were at our best,” said Bayern Munich star Mueller of Thursday’s game.

“The supporters gave us a great welcome. We want to win back little by little the credit we lost over the summer,” he added.