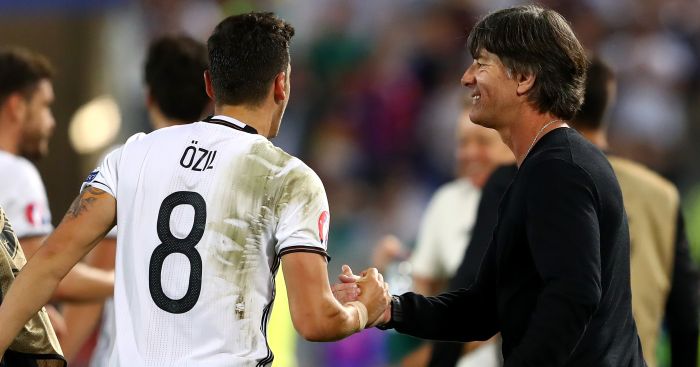 Germany head coach Joachim Low has ruled out the prospect of Mesut Ozil returning to the national team.

The outburst came after the midfielder felt he had been unfairly targeted from criticism following his meeting in May with controversial Turkish president Recep Tayyip Erdogan.

In his statement, Ozil said he would not be available for Germany “whilst I have this feeling of racism and disrespect”, suggesting he could return to the set-up if there are institutional changes within the DFB.

However, in Low’s view, the 29-year-old’s international career is at an end.

“In my view, Mesut Ozil has clearly declared his retirement and closed the door by himself with that, so a comeback is not a topic,” he told Sport Bild.

Low stated last week he had tried and failed to get in touch with Ozil after his announcement, admitting he was disappointed the player did not inform of his intentions. “Mesut did not call me, not to this very day,” he said. “I tried to reach him several times in the past two weeks, via text message, via phone. Mesut has decided to take this path. I must accept it.

“Ozil has been my player for nine years. We’ve experienced a lot together. A few lows, but more highs. We’ve won the World Cup. This will still stay forever.

“I am still of the opinion that he was one of the best players we had in Germany in the last 20, 30 years. One day, we’ll have a conversation. I would have wished for him to inform me personally, and I was disappointed at first.”