The presence of a two-time Ballon d’Or winner might intimidate some managers. But not Jose Mourinho . In fact, the United boss played a key role in Zinedine Zidane’s journey into management.

Within months of taking charge at Real Madrid, Mourinho hit it off with Zizou. So much so that he asked president Florentino Perez’s special adviser to work more closely with him. 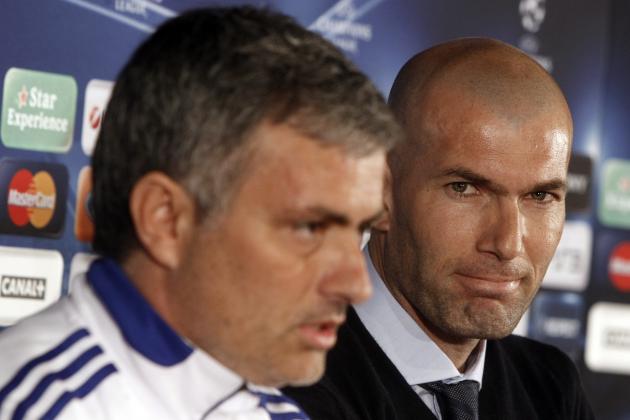 What was there to lose?

As special adviser to the first team, Zidane travelled with the squad, helped out at training and even attended coaching meetings with Mourinho and his staff.

He soon made an impact – particularly with compatriot Karim Benzema who began to find his feet in his second season at the Bernabeu.

“The main person responsible is Karim himself,” Mourinho said in March, 2011.

“There is also the positive influence of other players, of myself because I put a lot of pressure on players to play to the maximum ability.

“I also think of Zizou. He has several times worked psychologically with the guy.”

Just a few months later, Zidane was appointed as the club’s sporting director.

With Rui Faria and Aitor Karanka already employed as Mourinho’s assistants, there was not an appropriate right-hand role for Zidane.

So he was moved upstairs.

“I like that he is working with us and that he personally decided to change his life and be part of this project,” Mourinho said in July, 2011.

“He believes in this and thinks he can help. He has a lot to offer, but he also has much to learn.

“It is one thing to be the best player in the world for many years and another to be director of football of the first team at a club as important as Real Madrid.

“His intelligence, calm nature and the fact that he is completely open to communication make him a welcome addition to this group, in which everyone is excited to work together.”

It was only when Mourinho departed and was replaced by Carlo Ancelotti, Zidane’s former manager at Juventus, that the Frenchman felt comfortable about becoming an assistant before then managing the club’s reserves and, finally, becoming head coach in January, 2016.

The rest is history.