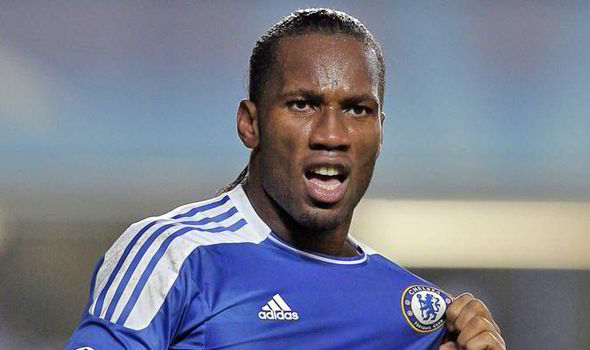 Football fans always have a vested interest in players who represented their favourite club. For this reason, fans tend to keep an eye on the performance of these players even after they’ve left, especially when the departed players are fan favourites.

However, at a club like Chelsea where numerous players leave every summer, it becomes difficult to keep track of former players, even the ones whom the fans adored.

For example, Nicolas Anelka and Jose Bosingwa both represented Chelsea for four years. Fans of the club may remember that these players left Chelsea to join Shanghai Shenhua and Queens Park Rangers respectively. However, very few would know the final clubs these stars played for.

The players mentioned above have retired, so they are not part of our list. We are discussing former Chelsea stars who are still playing and may have eluded your attention.

Samuel Eto’o was entering the twilight years of his career when he joined Chelsea in 2013 as a stop-gap solution for their striker woes. He scored 12 goals in 35 games for the club including a memorable hat-trick against Manchester United.

The Cameroonian left Chelsea after just one season and spent the first half of the 2014/15 season with Everton before playing the second half of the season for Sampdoria.

Chelsea signed Florent Malouda from Olympique Lyon in 2007 and he was on the club’s books for six seasons. He played 228 games for the London club scoring 45 goals and assisting 43 more but didn’t feature in a single game in his final season due to a fall out with the club’s hierarchy.

The Frenchman left the club on a free transfer in 2013 to join Trabzonspor and a year later, he joined Ligue 1 side, Metz. After leaving Metz, Malouda moved to Indian Super League (ISL) club Delhi Dynamos and played there for two seasons. In between the two ISL seasons, he also went on loan to Egyptian club Wadi Degla SC.

Great win last night by the lads and home support was amazing as always. 💚💛

Joe Cole’s career went downhill after leaving Chelsea in 2010. The former England international joined Chelsea from West Ham in 2003 as the sixth signing of the Roman Abramovich era.

Cole played 281 games for Chelsea scoring 40 times from midfield and won seven trophies including three league titles. He was named in the PFA Team of the Year in 2005/06 and also named the Chelsea Player of the Year in 2007/08.

Didier Drogba was one of the most influential players of the Roman Abramovich era at Chelsea. He joined Chelsea in 2004 from Olympique Marseille and scored 164 goals in 381 games in two stints combined.

The Ivorian first left Chelsea in 2012 after helping them win the UEFA Champions League. He joined Chinese Super League club Shanghai Shenhua before returning to Europe with Galatasaray.

Former Chelsea captain John Terry is currently a free agent but he hasn’t retired from professional football yet. Terry is currently weighing up his options amidst interest from several clubs and if rumours are to be believed, then his next club could be Celtic in Scotland.

Terry, a product of the Chelsea academy, played 717 games for the Blues scoring 67 times. He won 19 trophies as the Blues captain before leaving the club in 2017 upon the expiry of his contract.