Maurizio Sarri agreed not to buy any players from Napoli – apart from Jorginho.

Aurelio De Laurentiis, the Napoli president, said: “I only let him go once he had signed a contract which stated he would not be allowed to sign any of our players – apart from Jorginho.

“There was a huge battle to take more of our players but they didn’t manage it.”

Chelsea have reportedly agreed a £36m fee with Juventus for Daniele Rugani.

Rugani shot to the top of Maurizio Sarri’s list of defensive targets even before the Chelsea boss was announced as Antonio Conte’s successor.

And a lengthy pursuit has followed as Stamford Bridge chiefs attempt to overhaul their squad for their new manager.

Reports in Italy claimed Chelsea and Juventus were due to meet in Milan on Tuesday in order to discuss a deal for Rugani.

And it appears progress was made during those talks as the west Londoners look to add to the captures of Jorginho and Rob Green.

According to Transfer Market Web, Chelsea have “achieved a transfer deal” with Juventus for Rugani. 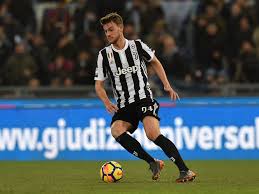 Three years ago, when Maurizio Sarri had just left Empoli to take charge of Napoli, he placed Daniele Rugani at the top of his transfer wishlist.

Sarri believes that trust is extremely important, and working with players he is familiar with, and respects, is crucial. Albanian right-back Elseid Hysaj and subtle midfielder Mirko Valdifiori — both mightily impressive under Sarri at Empoli — followed their boss to Stadio San Paolo that summer. The Rugani deal was much more problematic, though, and the coach knew it.

For starters, the young centre-back belonged to Juventus. Acquired by the Old Lady from Empoli in 2013, Rugani was loaned back for two seasons to gain experience, and his progress was remarkable. Naturally, the champions had no intentions whatsoever of selling him to their title rivals. That was out of question.

Secondly, Rugani himself only wanted to play for Juventus. Born in the small village of Sesto di Moriano, close to the historic town of Lucca, he was brought up around Juve fans during his childhood. All his family and all his friends supported the Bianconeri, and there was absolutely no other option for Rugani but to become a die-hard fan. So to go on and play for the club was a dream.

Now, however, the situation has changed. Rugani is still in love with Juve but progress under the tutelage of Massimiliano Allegri has been slow, and with his 24th birthday on Sunday he needs to push on. At the beginning of his Juve career, Rugani was seen as one for the future who had to learn from Leonardo Bonucci, Giorgio Chiellini and his personal idol Andrea Barzagli — so the centre-back did just that and waited patiently. However, with Bonucci moving to AC Milan in the summer of 2017, it was Medhi Benatia who was frequently preferred in the starting XI.

Rugani was left on the bench in the most important Serie A matches last season, including both fixtures versus Sarri’s Napoli. To make matters worse, he only started in one Champions League game during the entire campaign. Allegri might have frequently hailed the youngster, but with Mattia Caldara arriving from Atalanta, and rumours about a possible Bonucci return growing stronger, Rugani knows that his chances in Turin will be limited again.

For the Italy international, there is no more time to waste, and it is logical to return under the wing of the coach who really trusts him.

Under Sarri’s guidance, Rugani played like a superstar. He was voted as player of the season in Serie B, as Empoli were promoted in 2014. He then proceeded to play every second of the 2014-15 season in Serie A, and didn’t receive a single booking. That was an absolutely astonishing record for an inexperienced defender who represented relegation candidates, but Rugani’s ability to anticipate his opponents’ moves was sensational.

He compared to Gaetano Scirea, the most elegant centre-back Italy has ever witnessed. The youngster was very proud of that record.

“It is part of my style. I am more rational than others,” he said at the time. “I use brains rather than instincts, trying to read the situation. I don’t argue with referees and opponents too.”

Rugani is a model professional — it would be hard to find a more dedicated and disciplined footballer. At Empoli, Sarri had always praised him for being the first to arrive to the training ground and the last to leave.

Attackers love to improve their technical abilities, but you rarely see a defender who works tirelessly on a daily basis to make better passes with his weaker foot like Rugani. He never eats fast food, never drinks sugary drinks and spends Sunday evenings analyzing his own performances on video.

In short, he is the good boy of the Italian football. That doesn’t mean, however, that Rugani is weak physically. Standing at nearly 6-foot-3, he is magnificent in the air, and his athletic body enables him to take care of any striker. He is not a rugged defender, though. His football is about winning the ball cleanly and avoiding unnecessary contact.

One could claim that Rugani is the opposite of Chiellini in that respect, and that could be his problem at Juventus. In the most important games, Allegri tends to prefer imposing defenders like Benatia. Sarri is different.

“Rugani is ready for any European club. He is strong from all points of view, has outstanding mentality, and possesses incredible desire to improve,” Sarri said at the beginning of 2015.

“I just hope that he finds a team that lets him play right away.”

Those hopes have remained unfulfilled for three seasons, but now Chelsea could offer the cultured centre-back the stage he deserves — if the negotiations with Juventus are successful. The Old Lady may find it difficult to refuse an offer of €55 million for a player they consider a reserve.

In Andreas Christensen, the Blues already have one centre-back who almost never concedes yellow cards. By adding Rugani, they could establish a remarkable partnership for years to come.

That would definitely suit Sarri’s vision, and take Chelsea closer to the style that was widely celebrated at Napoli.